Sometimes too close isn’t good. On this hunt it was a close encounter of the first kind!

I just returned from my annual archery elk in near Chama NM at Fishtail Ranch.  Over the years I have found it to be one of the best elk hunting areas in the country.  You may not find the biggest elk there, but the elk population in the Chama area is incredible. Even though I saw and heard elk every place we hunted, because of high afternoon temperatures the elk weren’t very vocal.  Which brings me to my story and the closest encounter I have ever had with a bull elk.

My hunting partner, Stanley Oakes, and I went to an area we both had hunted several times over the years, it was near a waterhole I had the 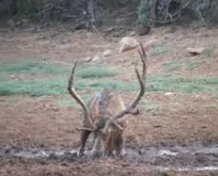 privilege of naming.  Traditionally whoever discovers a new area and then takes a elk gets the honor of naming that location, so I named the waterhole “The Endzone”.

It was a perfect morning, temperatures were in the high 30’s with very little wind.  We called a little and listened and to our surprise nothing responded.  Then about 45 minutes later after a few more cow calls, we heard an bugle.  Although he was pretty far away, we decided to go after him.  We stopped after about a 100 yards because we both thought we heard another bull above us much closer.  We called and he answered, so off we went.  I have always been a stickler for keeping the wind in my favor, even if it meant walking twice as far.  As we were working our way towards the bull, he would periodically bugle giving away his location.  After several bugles from the same location we guessed he was already bedded down.  Now we knew we had to keep the wind in our favor and try to work up to the level where he was bedded.  Once we did that Stanley backed off about 50 yards, putting me between the bull and Stanley.  We both started calling back and forth until the bull got up from his bed and started towards us.  At that time I stopped calling and Stanley would cow call of and on.

As I took my position I was about 30 yards from the crest of a little mound.  I felt like if the bull came across the mountain on the flat above me I would never get a shot.  So I moved up about fifteen yards behind three aspen trees.  I stood back about four feet from the tree to clear them from my bow.  My thoughts were, if he comes above or below me I should have no more than a 15 yard shot.  It was obvious to me the elk didn’t read our script and instead of walking above or below me, he walked through a thicket straight at me.  When he stepped out from behind the aspen trees he was at EIGHT FEET!  Anticipating he was coming I had drawn my bow.  When I looked through my pep, all I could see is brown hair.  I shoot with both eyes open so I knew I was right on him, but what I didn’t see was two little branches off the aspen tree four feet in front of me.  Yes, I managed to hit one of the branches that wasn’t any larger than a pencil, deflecting my arrow about 6 feet from the elk into the ground!

We had worked that bull perfectly, did everything right and it was an awesome experience.  I have always come to the conclusion that you 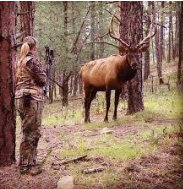 learn something new on every hunt, what I learned on this hunt was, 8 feet is way too close!