Stranger things have happen in the NFL, but I would need to see it!

Yesterday one of the good guys in the NFL, both as a  player and person, suffered one of the most horiffic injuries you can imagine.  Tragically Alex 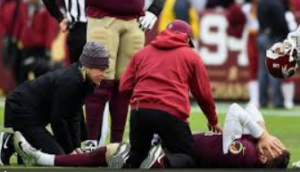 Smith, Chiefs former quarterback, broke both is tibia and fibula.  An injury like that is not only painful but demands immediate surgery.  For fans watching it was nausiating.

I vividly remember watching the Redskins game when Joe Theisman had a similar injury.  Both Joe’s and 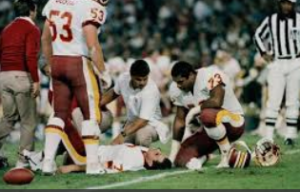 Alex’s, who I know personally, injuries made me sick to my stomach and caused me to break out in a cold sweat.  Having seen both of their injuries when they actually happend, made me think about how many times I had been in a similar position and nothing happened, just extremely lucky!

The fact that Joe’s injury happened 33 years ago to the day, is just incredible.  How about this note, Joe was at yesterdays game.  You don’t think it brought back nigtmarish memories?  Spooky doesn’t do justice to this coincidence.  Both played quarterback for the Redskins!

There isn’t much you can say, sometimes good guys get hurt.  In this case it was a real good man.

Thinking about you Alex!