Chiefs comeback after being down by double digits in all playoff games!

Where do I begin?  I think the Chiefs Nation believed their Kansas City Chiefs where the favorites to win Super Bowl LIV in 2020.  Early on in the 2019 season the Chiefs looked like the team to beat in the AFC.  Then the unthinkable happened, Patrick Mahomes, on the simplest offensive play, a quarterback sneak, dislocates his knee. 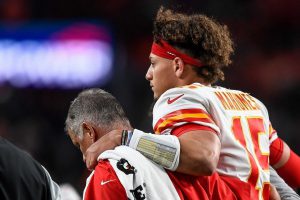 From what everyone could see on TV it looked like a season ending injury. The hopes of the Chiefs going to the Super Bowl had just ended!  Both Chiefs backup quarterbacks, Matt Moore and Chad Henne, are experienced but they are not Patrick Mahomes.  The optimism was no longer  high.  Chad was injured and Matt hadn’t started a game in over a year.

At the start of the season the Chiefs defense struggled, which was somewhat expected with additions to the lineup and a new defensive coordinator.  As the season progressed you could see a vast improvement in the defense, fewer mental mistakes and a lot more confidence in the their play.  Adding Tyrann Mathieu was a great move.  He added an element that was missing on the Chiefs defense, leadership. 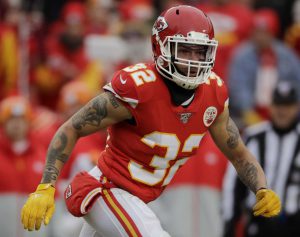 With the confidence of the Chiefs defense growing game by game and the return of Patrick Mahomes, Chiefs nation was back on the Super Bowl band wagon.

Our win against the Chargers in week 17 and the Patriot loss to Miami,  paved the way for the Chiefs first round bye.  Then what happened next was just pure fate!  The number one seed, Baltimore Ravens, lost their divisional round game to the Titans, making the Chiefs the highest seed left in the AFC.  In the Chiefs divisonal game against the Texans, the Chiefs went down by 24 points!  At that point, as I put it, the miracle began.  I told my wife, “Lets go, at least down to the Founders Club.  The Chiefs are giving this game away and are not ready to play!”  By the time we got to the Club the Chiefs had scored two touchdowns.  To everyone’s disbelief the Chiefs scored on seven straight possessions and won the game 51 to 31.  Chiefs Nation was out of control as was the Founders Club.

Next, the AFC Championship game and the miracle continued.  The Chiefs went down by 10 and the game was going in a bad direction.  The Chiefs Nation were all in and felt like if they could overcome 24 points from the week before,  being down by 10 was a deficit the Chiefs could handle.  Beating the 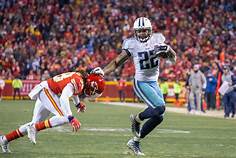 Titans 35-24 and winning by 11 was all part of this amazing season.  The Chiefs were AFC Champions and on their way to Super Bowl LIV!

Super Bowl LIV, Chiefs vs 49ers, here we come.  I took my grandson and we took in all the Super Bowl had to offer, a great thrill for both of us.  The game was such a roller coaster of emotions that it’s hard to describe.  Up by 7 and then tied 10-10 at halftime set the tone for the second half.  In the early part of the second half the Chiefs offense was very inconsistent and the defense gave up some time consuming big plays.  The 49ers were running down the clock.  Then something happened.  The 49ers had to punt.  The miracle continued.  Sammy Watkins made a couple key receptions and the touchdown passes to Travis Kelce and Damien Williams changed the momentum of the entire game.  You could see the looks on the 49ers faces. They were in trouble.  Other momentum changing plays came from the Chiefs defense.  chris jones chiefs – Yahoo Search Results Image Search Results  Defensive tackle Chris Jones knocked down passing attempts from Jimmy Garoppollo.  Quartback pressures by Frank Clark and safety Tyrann Mathieu allowed the defense to hold the 49ers and forced them to punt.

The offense and Patrick Mahomes smelled the blood in the water.  Big play after big play took place and before we knew it the Chiefs were in the lead.  The two plays that put the nail in the coffin securing a Super Bowl Championship for the Chiefs, were Damien Williams touchdown run and Kendell Fuller’s interception.damien williams – Yahoo Search Results Image Search Results

I do believe Patrick Mahomes deserved to be the games  MVP, but you can easily make the argument that both Sammy Watkins and Damien Willimas could have been named MVP’s as well.@sammywatkins • Instagram photos and videos

It was a great win for the Chiefs, Chiefs Nation and the Hunt family.